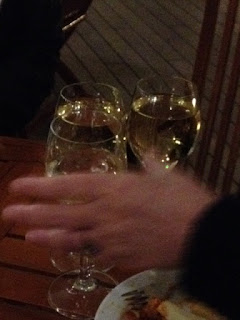 The party was in full swing, but Sheila was still nervous She would be the first one to admit that she wasn't good in a crowd. She just wasn't able to get the words out fast enough or loud enough, she thought. She had a lot to offer, but people didn't seem to notice her carefully crafted witticisms and pertinent political repartee. It always felt like the night was getting away from her. She was always disappointed.

Tonight would be different. She had read a self-help book that offered her a hard-edged strategy for successful party mingling. It involved mantras and deep breathing before arriving, and a scientifically-calculated amount of alcohol consumption, to be paced over the evening. She had programmed a schedule of sips and gulps into her new smart phone which she hung from her neck so she wouldn't make any mistakes.  The phone had a sleek and shiny case and a rhinestone encrusted lanyard, so it didn't look out of place. If anything, it made her look interesting and modern.

The plan was almost foolproof. She had practiced the two days beforehand in the privacy of her own home, and although there was no-one there to watch, she could feel that a new sense of ease and confidence was emerging. She had been looking forward to this party all day.

The first half hour of the program was a huge success, but when the bar was closing for an hour for award speeches and presentations, she had to act fast and make sure she had the right sip applications in hand for the evening. Shortly into the second of three glasses, when she forgot to hit reset on her smart phone party app, there was a little miscalculation. Sheila's confidence was high, but her timing, was wildly off and the night was a bitter disappointment.
Posted by Jennifer Price at 5:10 PM